Delicious slow cooker brisket in a savory and tangy sauce that will quickly become a favorite. So tender it will fall apart as you slice it.

Growing up, Lazy Mama (yes, that is my mother) hosted just about every family holiday. It was pretty much a solo act. Other than being asked to set the table, I don't remember being included in the prep process much.

Right around the time Mr. Wonderful and I bought our first house, she suggested that "maybe" it was our turn to host. She and Lazy Papa (you can guess who that is) promptly retired, sold their house and moved about two hours away.

As they passed by while speeding of town, they slowed down just enough to toss me some old cooking utensils. I was left holding the...soup pot. And basically no idea what to do with it.

This brisket recipe is a slight tweak of one a friend shared. A few years ago, I adapted it to the Slow Cooker and never looked back. Crockpots and briskets are made for each other. The low and slow cooking performs the double function of both tenderizing the meat and intensifying the flavors. If it didn't appear on our holiday dinner table, I think there would be revolt!

To make this easy brisket, you will need the following:

**Exact quantities can be found here

When I make brisket, I make a lot of brisket! This recipe freezes really well for future reheat and eat meals. As such, I generally buy a large, flat, first cut brisket.

This flat brisket sometimes comes with a good amount of fat on side. The first thing I do is remove as much fat as I can. This is an optional step. Some people feel that keeping the make makes the meet more moist and tender. This dish will be super moist and tender (and healthier!) without it.

Some recipes call for removing the fat after cooking. I personally like mine off before hand.

If you are a fan of slow cooker liners, the first step here is to place one in your slow cooker. If you would prefer not to use a liner, line your slow cooker with a very long piece of foil. You will later use the foil (or bag) to cover over your meat, as such, you will need to make sure that your foil is long enough to reach all the way around.

Next place onions and garlic in your crockpot. Place your beef on top of the onion and garlic chunks. Don't worry if it seems like it won't all fit, just cram it in there. The beef will shrink during cooking. I generally fit a 6-7 lb brisket in my 6 quart slow cooker.

Pour contents of dressing bottle over beef and fill bottle halfway with water. Shake the bottle so that as much dressing flavor as possible gets into the water and pour over the brisket. Sprinkle onion soup packet over the top of your brisket.

Finally, fold the extra foil or slow cooker liner over the top of the brisket so it is as if the meat is in a cocoon. Place lid firmly on slow cooker and cook on low for 8-10 hours.

Once your brisket is fully cooked, you have some choices.

Shredding or pulling the brisket apart into chunks is one way to prepare this meat for serving. This can be easily accomplished using two forks. The other is slicing.

Slicing a slow cooked brisket is not easy. It will be so tender, that it will want to fall apart. To make slicing easier, always allow the meat to rest for a while after cooking. An electric knife can make the job quite a bit easier. Be sure to cut perpendicular to the way the grain of the beef is running (against the grain).

Once sliced or shredded, return brisket back to your slow cooker and let is soak up all those awesome juices and heat back up to serving temperature.

There are so many wonderful ways to serve this dish!! I love it in the old, traditional style with baked potato and some asparagus or green beans. The sauce it so delicious that it is perfect to serve with a side dish that can soak up the extra such as mashed potatoes, mashed cauliflower or rice. It is also terrific served as a sandwich in a crusty French baguette or Italian roll.

This dish is delicious right out of the slow cooker. But, leftovers are my personal favorite. Somehow, it is even tastier when it is reheated. Leftovers can be stored in airtight containers or zipper top bags. Storing in meal sized portions makes for easy future meals. Your brisket will last 3-4 days in the fridge and 3-4 months in the freezer.

As an Amazon Associate, I earn from qualifying purchases. 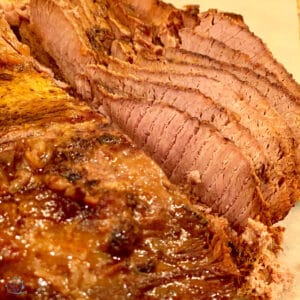 This item freezes really well and I almost always make it in advance and freeze it.  If you plan to freeze it, you do not need to cook for another hour after slicing.  Freeze the meat together with sauce from the pot.  I usually freeze in whatever container I plan to use to serve it.  Make sure it is an oven safe container so you can go right from freezer to oven when you are ready to heat it up!

Check out our latest on Intagram

Have you tried this recipe?? Please let us know your thoughts in the comment section below!