Slow cooker challah French toast is a one pot wonder! All the flavor of traditional French toast without having to stand over the stove. A great brunch dish to make for guests.

Breakfast food is in a class of its own. But, whoever invented the concept of brunch deserves an award. Brunch gives us an excuse to eat breakfast food later in the day. To that end, it's probably time to make Brinner a thing too because let’s face it, breakfast for dinner is also pretty awesome.

This challah French toast casserole couldn’t be easier to make and it is so good you are going to want it for breakfast, lunch, and dinner (Breakfast, brunch, and brinner?)!

To make this slow cooker French toast recipe you will need:

The first step is to beat the eggs together. All other ingredients are then added to the eggs and mixed in. The final item added should be the bread. Tear bread into golf ball-sized pieces and push it down into the egg mixture with a fork or whisk. make sure each piece has an opportunity to soak up a good amount of liquid. Last, let the mixture rest in the refrigerator for at least three hours. When you are ready, pop the mixture into your slow cooker vessel and cook for 2-3 hours on high or 4-5 on low.

Since I first posted this, I added a Crock-Pot 3.5 casserole style slow cooker to the family. When I made this in the casserole crock-pot, it takes closer to 4.5 hours to be fully cooked on low, but it cooked more evenly throughout. Since each slower cooker is different, I suggest using a good meat thermometer. According to the American Egg Board, any dish containing eggs like this one should reach an internal temperature of 165ºF to be considered ready to eat.

Although there are no wrongs or rights on how or when to serve this slow cooker French toast recipe, I suggest offering lots of fun toppings. Powdered sugar is the starting point. After that, it is up to your imagination. Maple syrup, whipped cream, chocolate chips, cinnamon sugar, Lazy Blueberry Sauce, and Lazy Boozy Banana topping are just a few that come to mind.

First and most important: don't expect leftovers! This dish is usually the first to go. In the rare event that you do have some left, it can be stored in an airtight container in the refrigerator for 2-3 days. If you won't get to it in that time period, it can be wrapped up and frozen. Frozen French toast will last in the freezer for 2-3 months. Leftovers are great reheated in the microwave or toaster oven.

Can this dish be cooked overnight?

Yes and no. If you have a slow cooker that automatically turns to warm, you can set it to turn to warm after 3-4 hours. If you leave it on low all night, it will burn. However, if you want to serve it early, you can prep it the night before and let it marinate in the refrigerator. In the morning, pop it into your slow cooker and cook on high. Depending on your slow cooker, it could be done in just a couple of hours.

What kinds of bread can I use besides challah?

So many different breads are delicious with this recipe. Some favorites include brioche, baguette and sour dough. Cinnamon raisin bread also makes for an extra special treat!

Why did my French toast come out soggy?

As an Amazon Associate, I earn from qualifying purchases and affiliate links. 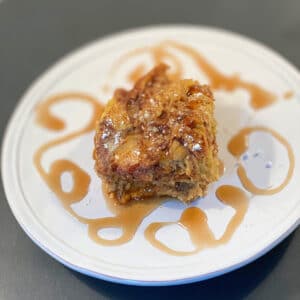 Have you tried this recipe? We would love to hear your thoughts in the comment section below!

Welcome to The Lazy Slow Cooker. I am so happy you are here! My name is Susan (yep - I am Lazy Susan!) and I am the recipe developer/blogger behind these posts. I am the mom of three amazing but super busy kids and the wife of one awesome and also super busy guy. All 5 of us have very different schedules and I would not survive mealtime without my crockpot. Read More…