The easiest and most fun way to make slow cooker cinnamon rolls.

I have hesitated to post this dish for some time. Partly because I am embarrassed by how easy it is to make. And partly because of the fact that it's ease has always been my little secret.

Since the main theme of this blog is "shamelessly taking the easiest route to great food", I am holding my head high, sitting up straight and squaring my shoulders as I proudly admit that these cinnamon rolls come straight from the can.

The good news is you can now buy them from multiple manufacturers. Including an organic one that has fewer and more natural ingredients. So lets be proud of our pre-made dough because using it really does make this the easiest and most fun way to make slow cooker cinnamon rolls.

As a side note, I really hate popping the cardboard on those dough cans. Am I the only one? Does that sound make anyone else jump?

As an Amazon Associate, I earn from qualifying purchases. 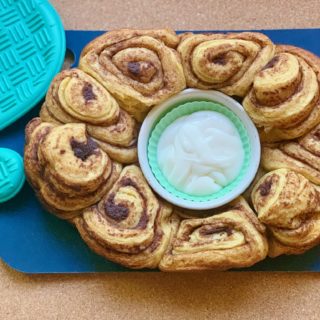