Not sure exactly why, but the idea of attempting to make pho always intimidated me. Somehow I felt that all the delicious flavor had to the be the result of some ancient cultural magic I was not privy too. When I combined that with the idea of trying to translate it into an easy and workable slow cooker recipe, I shied away. I just couldn’t imagine being able to figure it all out.

But ultimately, curiosity got the best of me. So, I decided to do some research and conducts some trials. The result: this delicious and quite easy recipe. No ancient magic involved. At least not in my version. Can’t speak for what happen in the kitchens of some of the restaurants that make this delicious soup....

Either way, I feel confident saying that this is the easiest way to make delicious chicken pho

As an Amazon Associate, I earn from qualifying purchases and affiliate links. 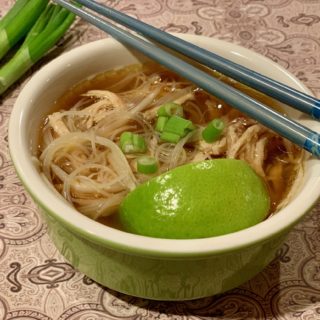 Welcome to The Lazy Slow Cooker. I am so happy you are here! My name is Susan (yep - I am Lazy Susan!) and I am the recipe developer/blogger behind these posts. I am the mom of three amazing but super busy kids and the wife of one awesome and also super busy guy. All 5 of us have very different schedules and I would not survive mealtime without my crockpot. Read More…